The plant badge of a clansman is a sprig fixed on a staff, spear, or bonnet. The MacRae plant badge is the fir club-moss (lycopodium selago). In Gaelic, this is "garbhag an t-sleibh". Itias supposed to possess magical powers as the following translation from the Gaelic indicates:

The fir club moss is on my person,
No harm or mishap can me befall,
No sprite shall slay me, no arrow shall wound me,
No fay or dun water nymph shall tear me. 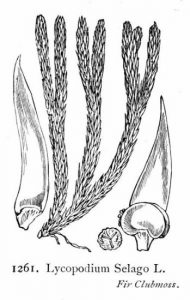 A war cry is a short phrase that was used by clan warriors to bolster their courage as they charged the enemy. War cries are often the family name, the name of the leige lord, a religious invocation, or threats meant to invoke fear.

The war cry for Clan MacRae is "Sgurr Uaran," the Gaelic name of the most prominent peak of the mountain range named the Five Sisters of Kintail. Kintail is the area in the Highlands in which Clan MacRae settled. Sgurr Uaran is the name that has been adopted for the Clan MacRae newsletter. To pronounce the war cry: 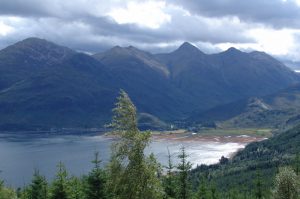 Our clan motto, which appears on our clan crest and Coats of Arms, is " EX UNO AD PLURES," meaning "From One to Many," commemorating the "Scattered Children of Kintail."